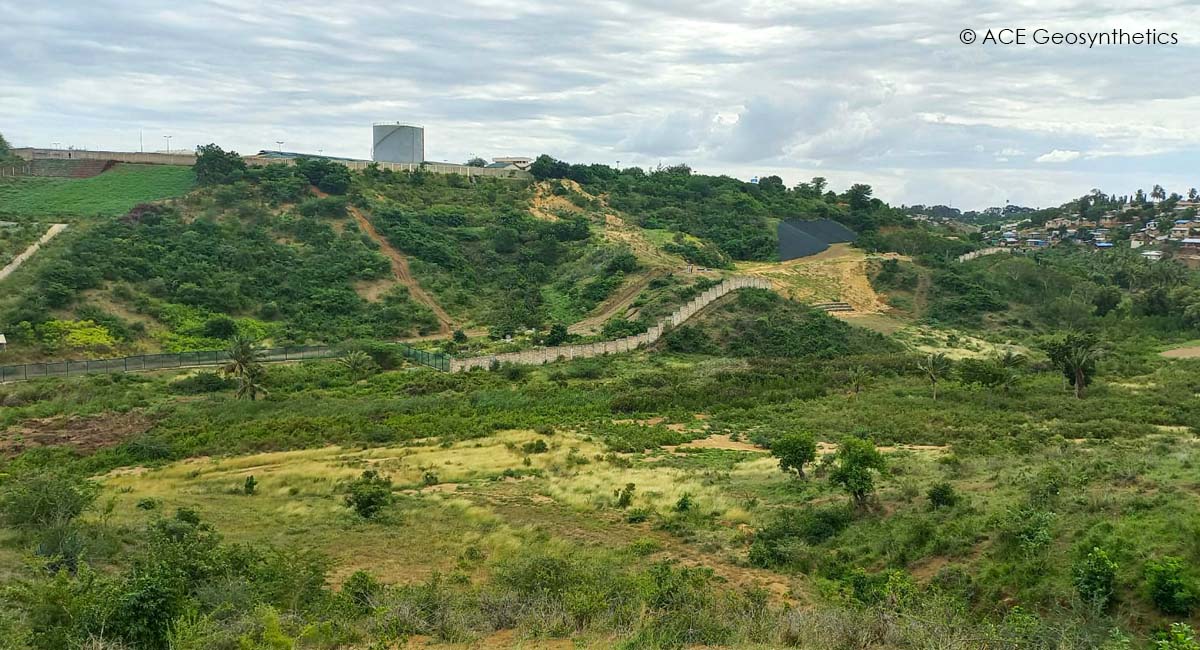 The climate in Africa is diverse depending on the country and how far it is close to the ocean. And it does not have as frequent rains compared to wetter continents; therefore, its drainage system is seldom especial to maintain. However, its rainfall pattern is rush and heavy, so the rainfall erodes the surface earth severely. In the case below, we will discuss how to resolve the problem.

This project is in Africa. The plant owner observed that the downslope near the large water storage tank was continuously eroding due to inadequate stormwater drainage for the Southeast quadrant of the facility. The erosion has seriously endangered the safety of the water storage tank and adjacent working area. The owner must conduct an immediate emergency repair for the damaged high slope. This facility is a fire-hazard areas; therefore, a water tank must constantly be ready on site for fire prevention. In addition, frequent torrential rainfall occurs during the rainy season. For permanent slope rehabilitation, in addition to stability, the designer should consider a well-protected surface with eco-friendly vegetation. 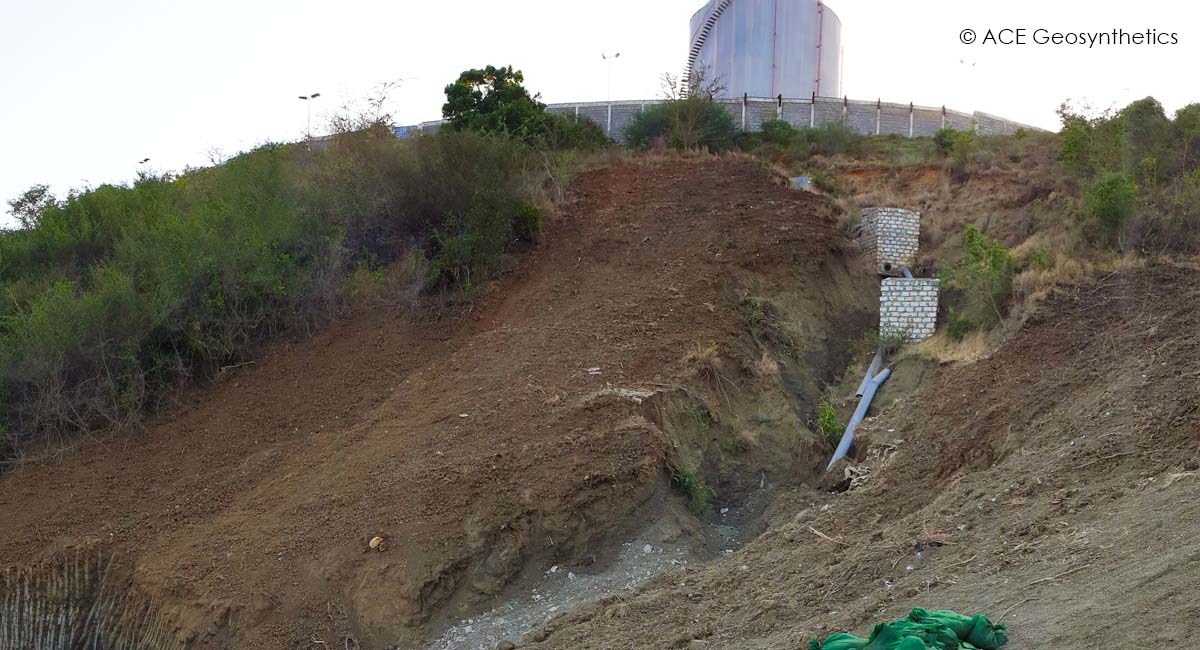 Problem
During the earlier stages, slope erosion seriously destroyed the existing drainage system. Since then, the constant rainfall has triggered further continuous slope damage, and the plant's perimeter fence was also displaced. In addition, there is a large water storage tank with a heavy load on the crest of the slope. If the authority delays the rehabilitation of the slope, it may further endanger the overall structure's safety.
The site is in a valley with devious natural terrain; therefore, the slope restoration must not only be able to conform to the site conditions but also resume an eco-friendly environment. Because the slope was damaged by erosion, the repair must be erosion resistant. The owner also required that the slope construction be completed within a limited schedule to ensure the safety of the water tank. In addition, because cement is costly here, reinforced concrete structures that require many cementitious materials, labor, and equipment are unsuitable. 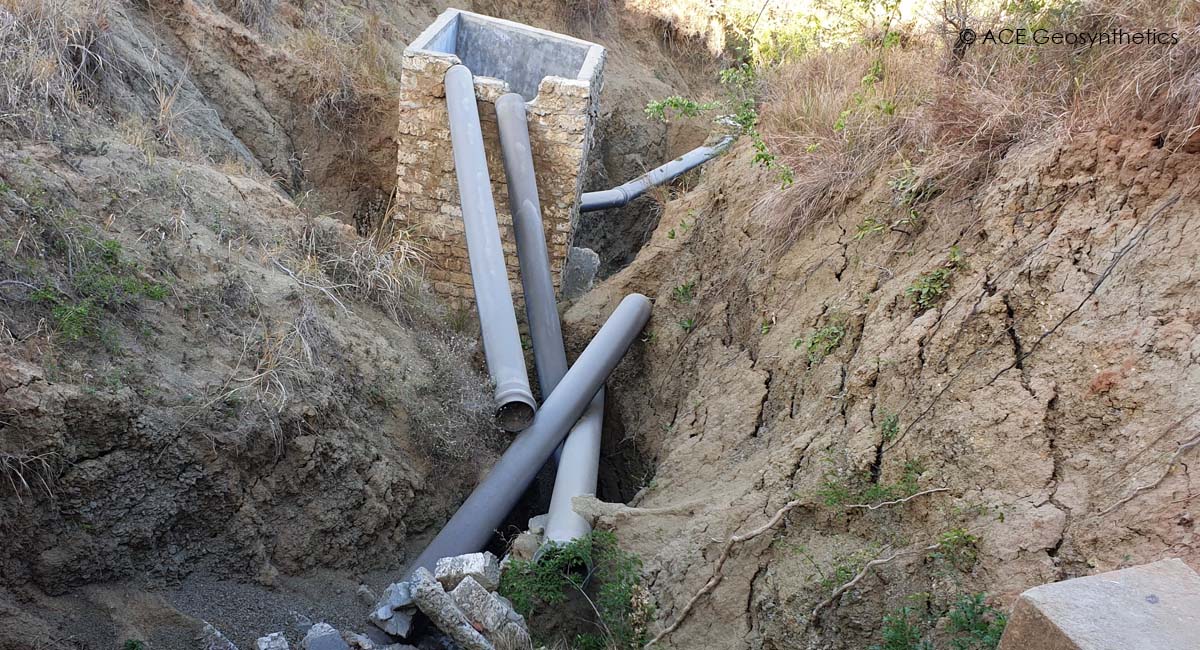 Solution
After comparing several schemes for rehabilitation, the authority finally decided to adopt the reinforced earth slope (RES) method by considering all the factors pertinent to the construction and the site conditions.
The reinforced earth construction provides a simple, fast, and cost-effective solution. It can be constructed to almost limitless topographic constraints using simple equipment without requiring particular skills from the laborers. The contractor filled from on -site borrow pits was used because of no collapsed debris. Thus, the owner could reduce significant export waste and import fill. Among all the proposed geosynthetics, the designer adopted ACEGrid® and ACESandbag™ EC for the reinforced earth construction by considering all the engineering requirements for this project, such as applicability, durability, safety, cost, and sustainability. 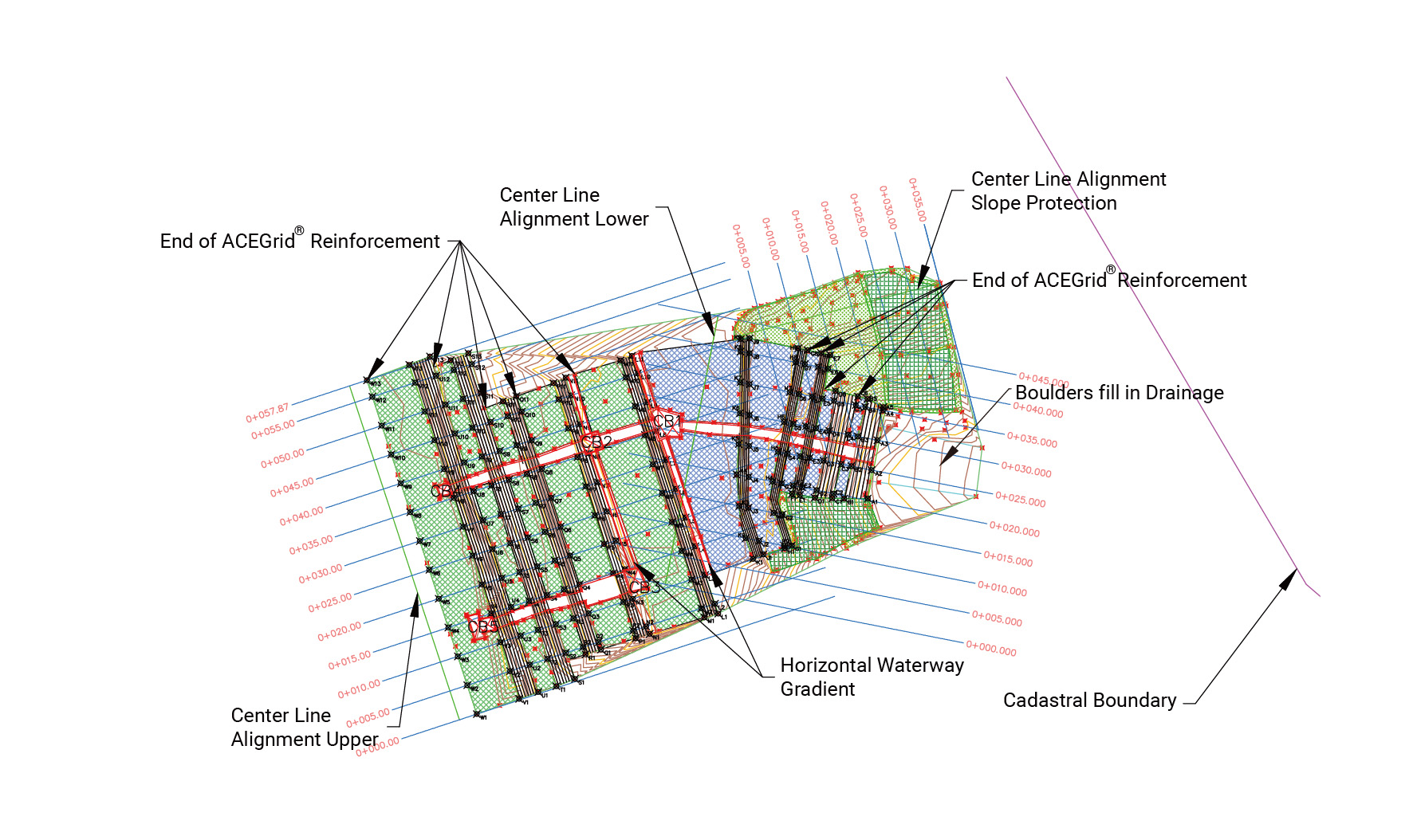 The reinforced earth slope was constructed in 10 tiers steps down from the top of the hill in a slightly clockwise direction by following the topography change at the site. The height of each step is about 5.5 to 6m, and the width is about 4 to 7m.
The earth structure was built directly using the on-site soil with ACEGrid® geogrid wrap-around facing and setback with an inclined ratio of 1:2(H:V). Stacked vegetative soil filled ACESandbag™ ECs were used for slope face protection and visual integration with the surrounding environment. Stacking ACESandbag™ ECs for RES’s facing were simple. They were not only easy to shape but also provided excellent erosion resistance. Its infilled soil also facilitated vegetation growth and prompted natural aesthetics. 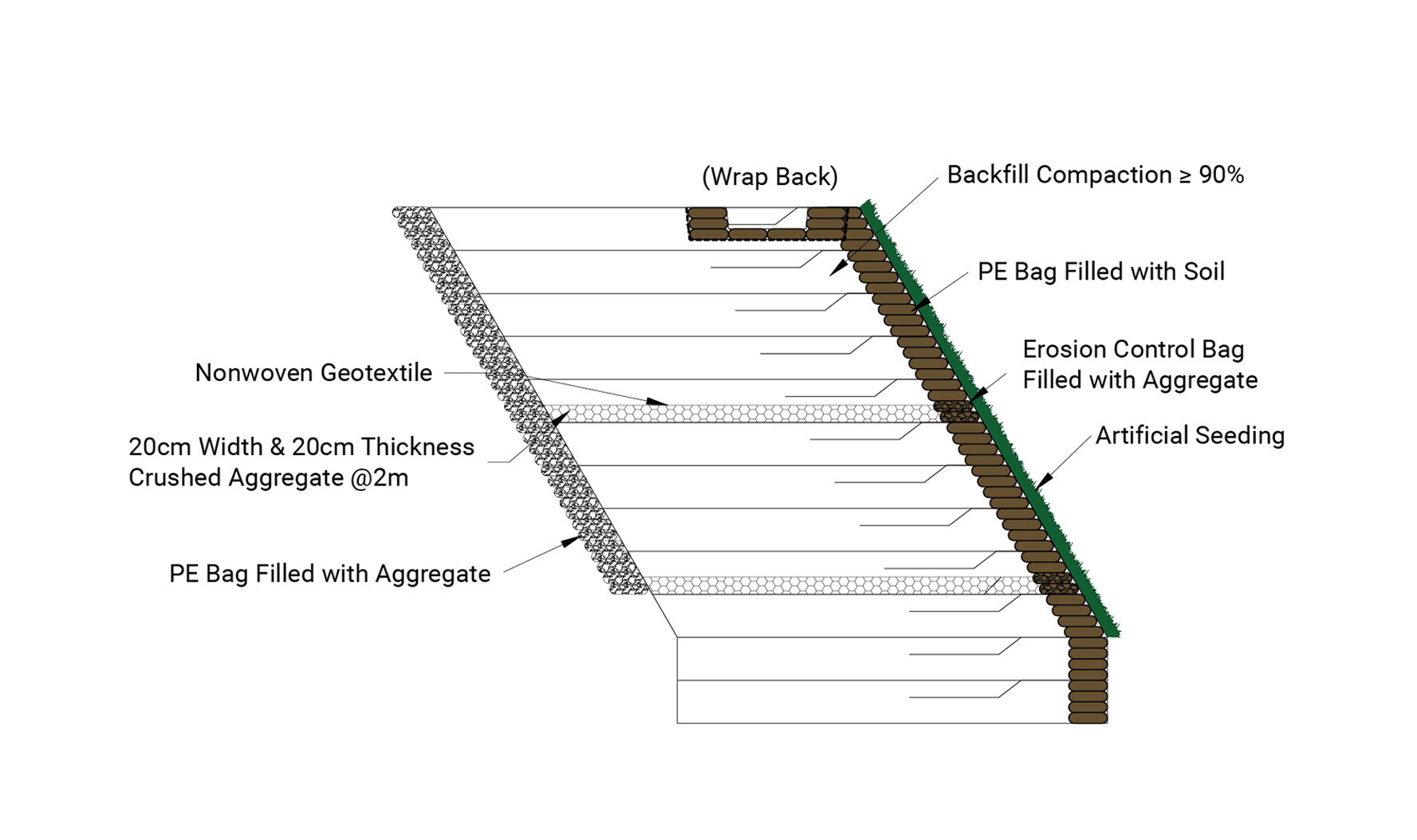 Vertical drainage trenches consisting of stacked ACESandbag™ ECs were built for each tier of RES from the top of the slope to the toe to prevent the surface overflow from eroding and softening the RES. Stacked ACESandbag™ ECs also were placed on top of each setback terrace of RES for surface erosion protection. In addition, ACESandbag™ ECs filled with aggregate and wrapped around with nonwoven ACETex® NW were used to build the internal curtain interceptor and horizontal drains within the reinforced earth slope for seepage dissipation. 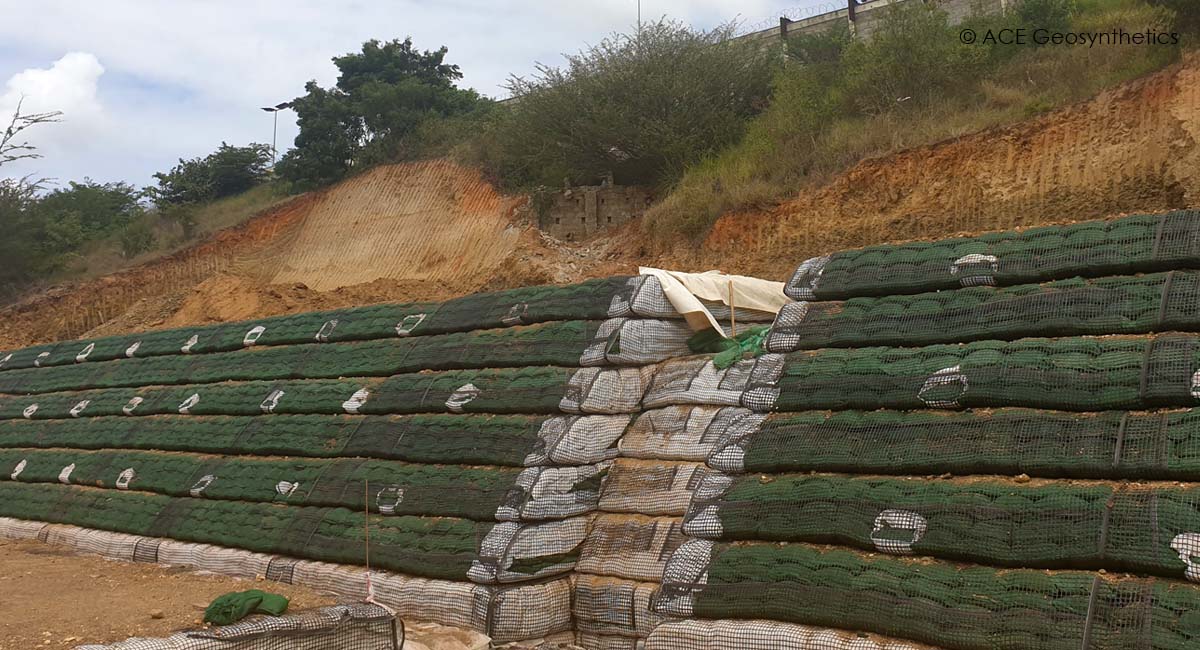 Because the site's geological materials are vulnerable to erosion, ACESandbag™ ECs filled with soil and seeds and ACEMat™ R were placed to cover these areas to protect the proximal areas of the RES from erosion. 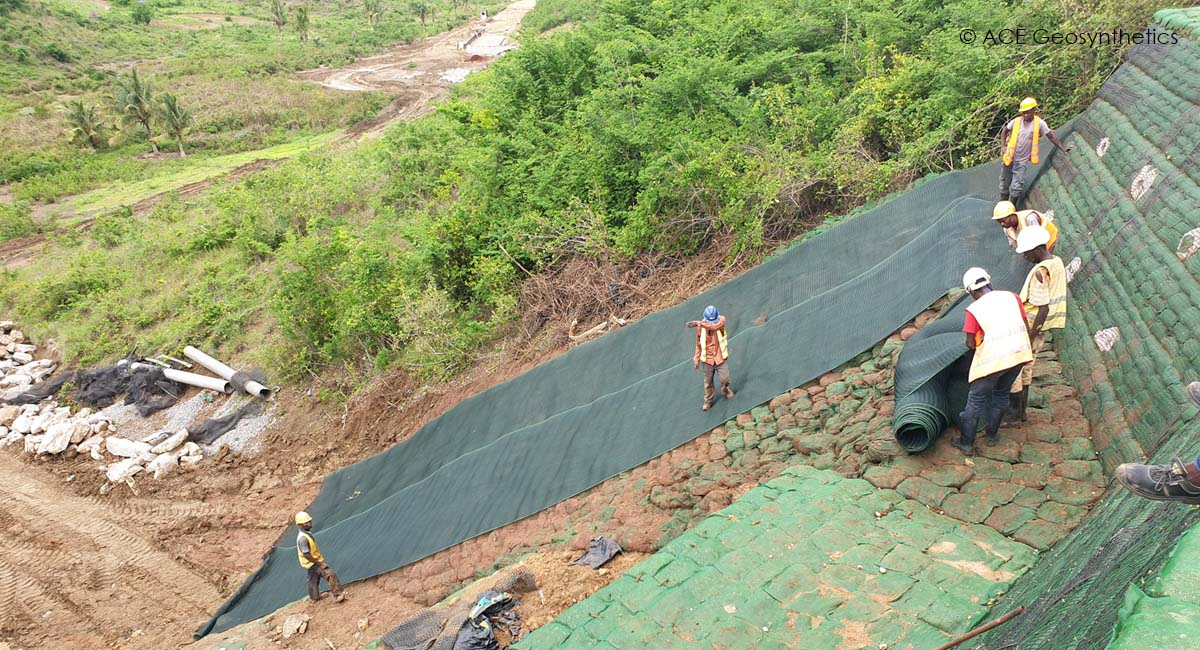 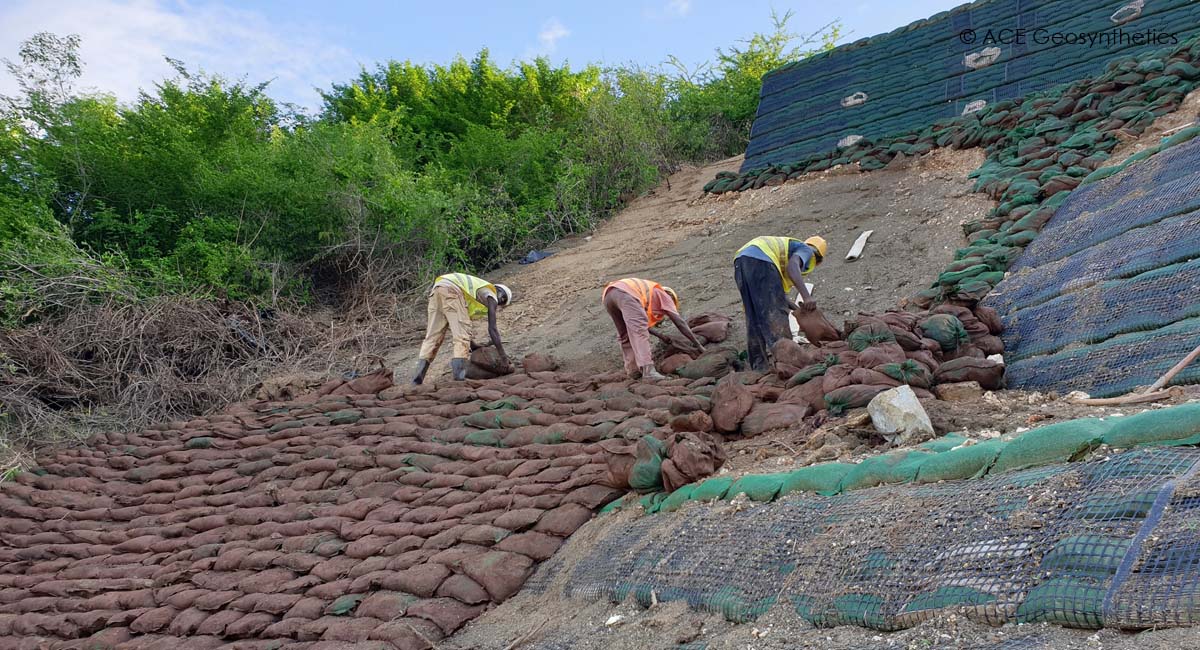 The project was effectively completed within the limited budget and schedule. In-situ soils were well compacted and intimately integrated with ACEGrid® geogrid in the structure, contributing to the strong resistance of RES. The green vegetation on the reinforced earth slope has given the site a natural appearance, providing an aesthetic and eco-friendly environment for local species. The result shows that ACE Geosynthetics can provide a beneficial solution to meet the site's demand. As with other similar projects already implemented, the rehabilitation for this project has proved successful. 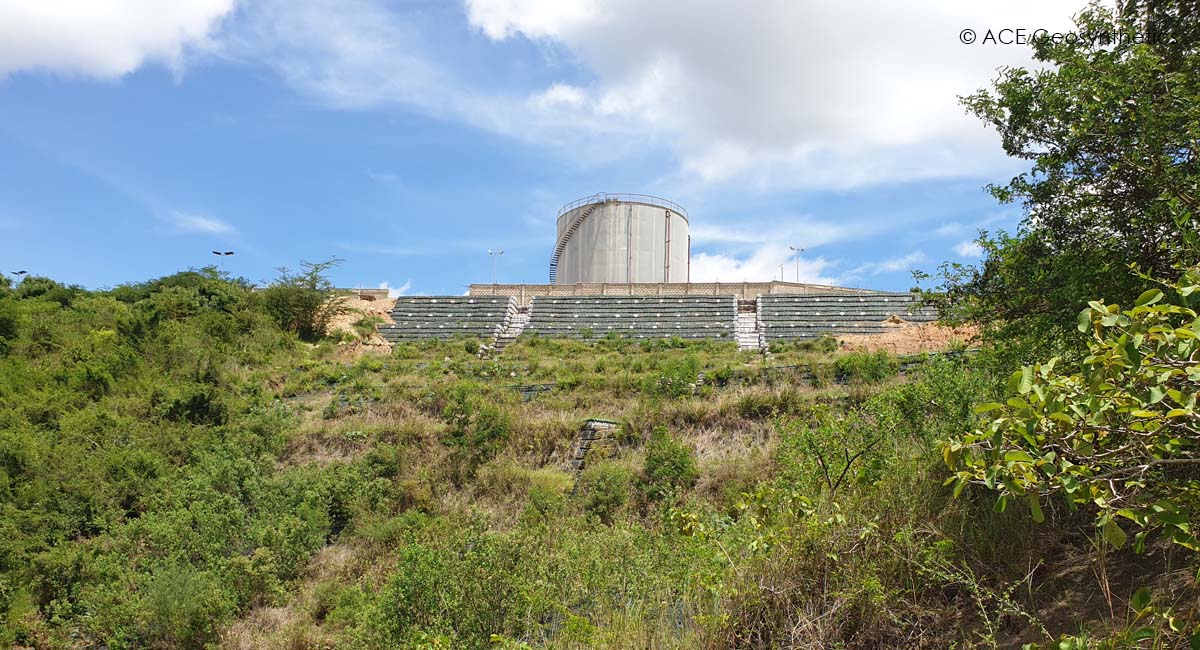 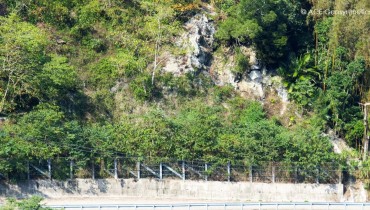 TOP STORY There are sixteen aborigines in Taiwan. In the 18th century, as the Han people develo... 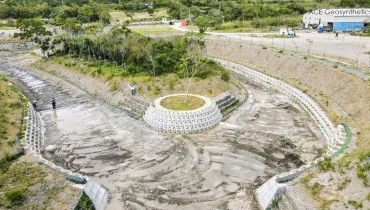 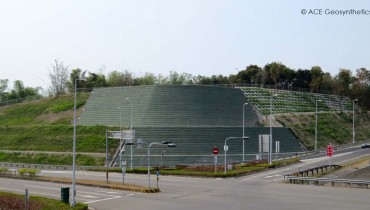 TOP STORY Freeways have contributed to a country’s economic growth, which not only...