Irrawaddy River, the mother river that feeds Myanmar and nourishes the beautiful Buddhist country, is 2,173 kilometers long and runs through Myanmar from north to south. Numerous, of both, urban and rural areas are located along the river, making the watercourse the cradle of Myanmar’s civilization and brilliant history from ancient times to the present. The river basin alone accounts for 60% of the country’s total area, and with an average of 9m depth, the mainstream does not only serve as a commercial waterway, but also as a main agriculture crops irrigation source.

During the rainy season, usually from May to October, as a result of the wet monsoon, heavy rainfall, and the destroyed adjacent catchment area, the Irrawaddy River witnesses frequent large-scale inundations every year. In addition to the rainy season, and from the beginning of this decade, the construction industry in Myanmar took off from 2010, and the need of construction materials led to an increase in sand and gravel mining, yielding in riverbank erosion and sandbars loss.

Different structures built along the river, from houses to historical sites to temples are flooded each year. A historic village, adjacent to the river in central Myanmar was collapsed and ruined by the effect of the flood. The government, has thereby, invested a considerable budget to relocate the village. However, this relocation does not fix the problem. Consequently, the country’s government is actively cooperating with international donors to formulate river system management policies and fund the plan to implement riverbank protection projects which cover this case.

The riverbank erosion, for this case, took place in the middle of an S-shaped meander channel. The in-situ soil, a susceptible to erosion silty-sand, next to the flow’s high velocity reaching 1.7m/s on normal seasons and higher values on the rainy ones, regenerate critical scouring along the riverbank reaching the 45~70 degrees. Stones and sandbags were placed to reinforce the site before, but in vain, the weak protection structure was torn down by strong floods again in 2018.
Urgent and complicated case it is, a variety of obstacles were encountered during work. During the proper working period –the dry season-, the maximum water depth is about 12m (40ft), the slope height above the water level is about 6m (20ft), and the slope length with intensive erosion requiring protection is about 27.5m (80ft). Moreover, the critical curved section is a vortices region, hence the presence of quite few erosion holes of different sizes and locations.

Most projects in Myanmar are contracted out in the beginning of each year and only three months before the rainy season begins. On that account, projects construction and completion (including equipment installation and land leveling) know a time pressure and a tight schedule.

A steep and long slope, a deep water level, strong currents, severe erosion, short construction period, and a tight budget (as the Irrawaddy River is subject to other projects), all things considered, the project is indeed an extreme challenge to achieve.

After considering both advantages and disadvantages of this project in terms of safety, durability, constructability and other aspects, the government and designers introduced the ACEFormer™, a geotextile mattress filled with cement mortar, to be installed on the slope. The ACEFormer™ can efficiently prevent the water flow, and what it carries, from attacking the slope surface and eroding the in-situ soil. Accordingly, the ACEFormer™ can be a reliable shield to the riverbank.

After evaluating the anchoring forces of the structure during construction and the overall structure stability after installation. Both vertical and horizontal anchoring were considered in the top part of the slope, where the overall anchoring area was covered with concrete by the end of the construction. As for where the ACEFormer™ is to be installed, erosion holes were first filled with sand bags in order to level the jobsite. Once leveled, the mattresses were laid and anchored with steel bars vertically inserted into the soil. Regarding the submerged part of the mattresses, the toe was pressured with gabion boxes for the purpose of providing more stabilization to the overall structure.

Large construction equipment was hard to transport until the jobsite and the underwater work was difficult due to the turbid water. In an effort to achieve good work in a record time, workers opted for the physical effort to fulfill the different tasks, whereas for the submerged part filling, the filling thickness was monitored with a remote detection sonar.

Although the rigid revetment methods are several to choose from, the ACEFormer™ is with no doubt the best fit for this project; that is neither the 12m underwater slope nor the time pressure presented major obstacles for the project completion. On the top of that, ACE efficiency’s trait could also be noticed as the needed mattresses with different widths were previously customized and manufactured in the factory to save the in-site sewing and installing time.

Shortly after the project completion, the rainy season started and the river’s water level rose all the way to the top of the new protection structure. Once the floodwaters had receded, officials from the Water Resources Bureau and local residents went on site to inspect the new structure’s condition. As the structure remained fixed, the witnesses, widely grinning, were satisfied with the result and could finally feel relieved at the thought of residing beside the river was no longer a danger.

The Myanmar local government has long invested and spent many budgets seeking the right erosion control method for Irrawaddy riverbank. The riverbank’s protection seemed as an impossible mission; but with the proper cooperation between the designers, product manufacturer and construction contractor, the mission was successfully achieved. 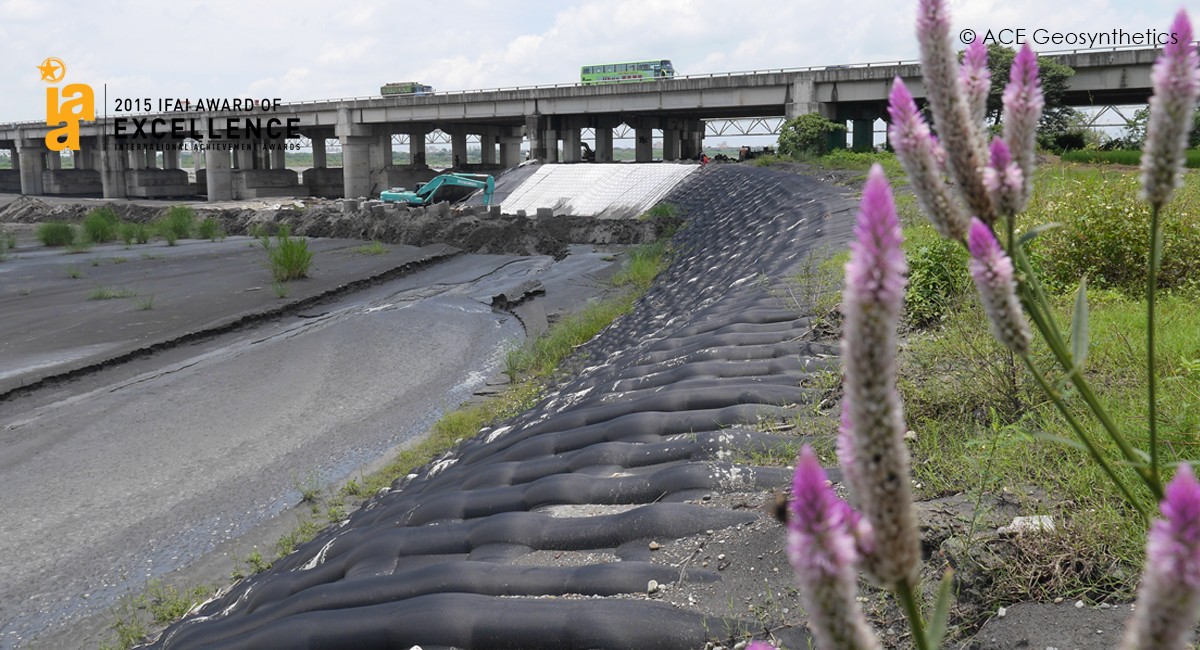 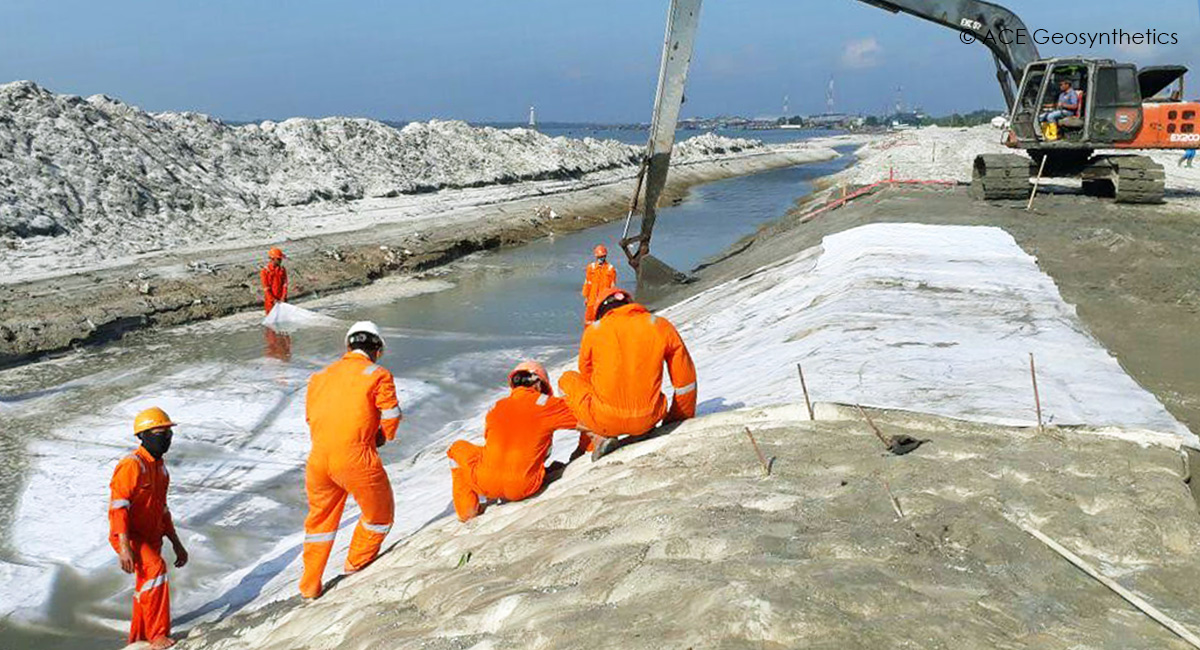 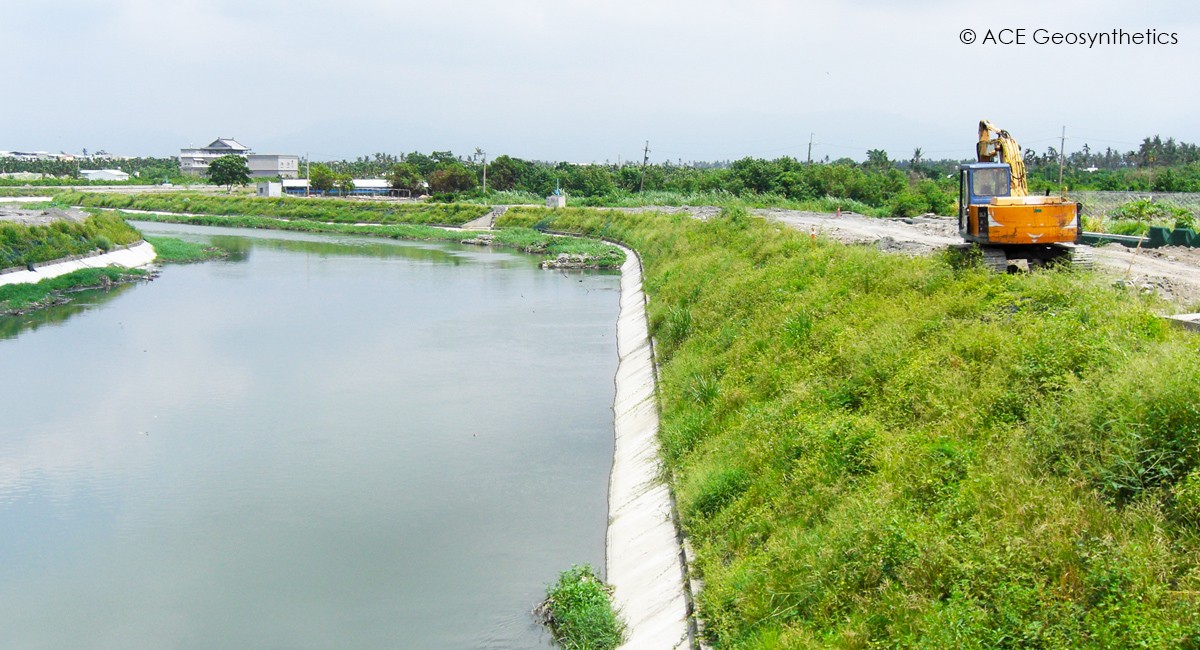